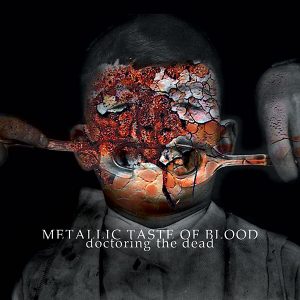 Metallic Taste of Blood’s Doctoring The Dead is now available as CD Digipack, Single Vinyl 180gms and multiple download formats, both in the real world and across the web!

from the press release:

The vigor and inventiveness which characterized Metallic Taste Of Blood’s first release still sits center stage, a natural outflow of the band founder members’ very wide palette of musical experiences/collaborations and individual talents, spanning an incredibly rich vocabulary which extends from ambient and electronica, to progressive rock and avant-jazz, to noise and industrial electronics, all firmly anchored by the deep and precise dub beats laid out by Ted Parsons, sparkled, on select tracks, by the surprising keyboard inventions of Powell.

This variety of influences and musical idioms manifests itself in a very specific kind of sound, one that is now characteristic of the band, one which is predicated and thrives on the very notion and practice of the contraposition of opposites. The music of Metallic Taste Of Blood is both incredibly brutal and delicate, distorted, but incredibly clear, boiling hot and yet suddenly very cool, sweet yet suddenly brackish, that very peculiar unity in contradiction to which the band’s own name refers to.

Doctoring The Dead, recorded in Prague at Faust Studios, mixed in Italy and mastered in the US by Mike Fossenkemper, though moves ahead towards new territory by bringing in a new, focused single-mindedness; witness to this are the album’s eight tracks, starting with “Ipsissimus, ” where an deep dub rhythm section supports the entangled duel of baritone electric guitar and synth, to “Pashupati, ” whose guitar lines dance between extreme cleanliness and growling distortion, to the cosmic Ambient Bass inflections of “Synthetic Tongue, ” to the calming riff and distorted electronica of the title track, to Blind Voyeur‘s beyond-post-rock grandeur, the dark ambient glitch of “Day of Bones, ” and further down to “Murder Burger” and beyond, towards the closing “Death Of Pan.”

Out of contrast perfect balance is reached, when distorted guitars sound clean and soothing, while cascades of piano notes suddenly morph into threatening shards – listening to this will lift you into a state not unlike that of cognitive dissonance, one of deep, uncomfortable enjoyment.”