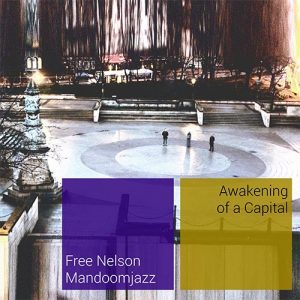 Discovered by Eraldo Bernocchi, Free Nelson MandoomJazz (Rebecca Sneddon on Saxophone, Colin Stewart on Bass and Paul Archibald on Drums) entered Gorbals Sound Studios in Glasgow early Autumn 2013 to both re-record their original compositions (three from their self-produced debut EP “The Shape Of DoomJazz To Come” and four from their also self-produced follow-up EP “Saxophone Giganticus”) and to record Awakening Of A Capital, the new full length Album whose title refers back to Luigi Russolo’s 1913 experiments in musique concrète.

Over three intense days they recorded 15 magnificent tracks, which were then subjected to the magic touch of Italian soundsculptor Eraldo Bernocchi, who edited and mixed the material.

Awakening Of A Capital picks up where the first double EP left – finding the sweet point were the power of doom meets the free voicings of Albert Ayler, where Sunn O)))) Meets Sun Ra.