two events were recently hosted by RareNoiseRecords: November 20th 2013 we held a RareNoiseNight as part of the EFG London Jazz Festival and on December 13th we held one at ShapeShifter Labs in Brooklyn, NYC. Both were well received by the press and public – here are two of the articles that have appeared since – we start with John Ephland’s  piece for downbeat :

A Forest of Sounds at ShapeShifter Lab’s RareNoise Night

It was a night of rare, wonderful music, with a gathering force that found people rocking in their chairs. On Dec. 13, the London-based record label RareNoise presented three acts at the increasingly hip, noteworthy ShapeShifter Lab in Brooklyn. The showcase included sets by tenor saxophonist Ivo Perelman’s trio One; the quintet Plymouth featuring guitarist Mary Halvorson; and the improvising quartet Slobber Pup. But the evening’s fulcrum, its putative star, was Joe Morris—guitarist and bassist for all three sets.

Morris and Pándi returned for Slobber Pup’s closing set, which had more of a rock sensibility with the recurring pulse of the drums, acid-tinged guitar work, organist-keyboardist Jamie Saft’s deep grooves and soaring lines and Trevor Dunn’s foundational, funky and usually spare bass lines. Slobber Pup’s hefty sound was vital but more of an echo of the Plymouth set that preceded it.

During Plymouth’s performance, listeners got their first dose of the bearded, grey-headed Morris’ elastic picking and occasional strumming on guitar. Here, the quintet took the electricity of One’s opening set of free-ranging jazz to a new level with Saft’s multiple keyboards, the hollowbodied guitars of Halvorson and Morris, the fiery yet subtle drumming of Gerald Cleaver and rock-solid, spare musings of electric bassist Chris Lightcap.

Beginning with a dose of dreamy electric piano, Plymouth brought on a storm of floating, shimmering rubato. The playing centered around a gently implied beat. Halvorson’s guitar work started with deft, unobtrusive slide playing, which provided a contrast to Morris’ more dedicated single-note lines. Saft’s chimey chords directed the music into a loose-limbed rock cadence, while Morris’ hard-edged picking served as a drone. Halvorson replied with lush chordal phrases, while Saft’s scary-movie organ lines were a lattice for what became a two-note jam of squirrelly lines, repeated over and over.

Saft continued with dense thickets of sound combined with repeated loops and pedal effects from both guitarists. By this point, there was an audible heaving and sighing over a definite groove, menacing but also somehow innocent. The group improvisation could be heard as a collection of voices—five individuals foraging through a forest of sounds. ShapeShifter’s acoustics provided an optimum platform for an enhanced, sustained listening experience. The satisfied crowd luxuriated in the sounds created by these eloquent improvisers, Joe Morris chief among them.

and continue with Monika Demmler’s piece for Jazzwise:

God Knows Where I Am From: Berserk! + InterStatic Live at XOYO – EFG London Jazz Festival 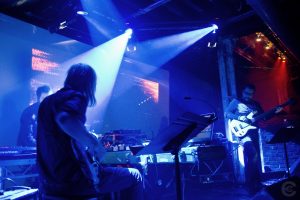 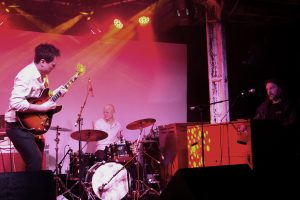 With an inviting smell of incense wafting around the club helping to create an intoxicating psychedelic atmosphere, InterStatic set about seducing listeners with their spacey magical sounds. Unusually for a frontman and bandleader, Powell sat in front of a Hammond organ, rendering 1970s Pink Floyd influenced sounds to be mixed with solid tunes from guitar backed by driving drums. In songs like ‘Watermusic’ or ‘Anthem’, jazz, rock, shoegaze and psychedelica mingled so seamlessly that the breaks were barely noticeable. After taking the audience to many different musical spheres, the Hammond player departed with a sincere: “God bless you.” 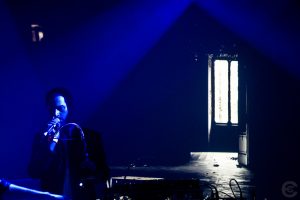 InterStatic may have journeyed into inter-stellar space with Powell introducing himself mysteriously as “only God knows where I am from,” but Berserk! also evoked the sense that we as human beings are part of the wider universe via their astonishingly transcendent audiovisual performance. Fornasari mingled his majestic playing of a seraphine (an early keyed wind instrument, which makes its sound via air being blown across metallic reeds), with his extraordinary vocal range. The talented composer Feliciati created an amazing mix of musical styles, ranging from the classical ‘Ave Maria’, 1920s swing/jazz music to 1980s electronica, and snatches of popular tunes by the likes of Pink Floyd, Kraftwerk, or Joy Division, evoking strong memories from this listener’s childhood. In this well-conceived performance, the visceral atmosphere was also heightened by the use of movie effects and field recordings from a Spaghetti Western train whistling or an iPhone ringing.

Not only transcendent moods were awakened but also background screenings of a lady eating a strawberry cake with her bare fingers or the beautiful green scenery of a pathway with trees behind it, contributed to make their inter-media manifesto indeed both brilliant and berserk!