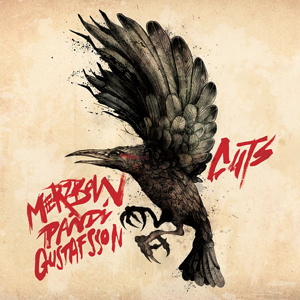 Quoting from the Press Release:

“If jazz, as the eminent critic Whitney Balliet once wrote, is the “sound of surprise,” Cuts, an intensely cathartic, fiercely turbulent collaboration between Japanese noise purveyor Masami Akita (aka Merzbow), Hungarian drummer Balazs Pandi and Swedish saxophonist Mats Gustasfsson, is the “sound of shock and awe.” A sonic assault of epic proportions, it blends the bombast of Merzbow’s grinding white noise barrages with Pandi’s thunderous pulse on the kit and Gustafsson’s ferocious abandon on baritone sax and clarinet mixed with live electronics, bringing to mind a marriage of Lou Reed’s Metal Machine Music and Coltrane’s Interstellar Space, with touches of Sonic Youth’s sonic mayhem thrown in for good measure.”

Recorded on April 14th 2012 at Metropolis Studio in Budapest, Cuts has been mixed in Tokyo by Masami Akita himself.

The Album is available immediately in

The Vinyl and CDs will also be available from Online retailers (Amazon and Others) from early April and in digital form (.mp3) from all the usual digital retailers (Itunes/Emusic/Amazon/Spotify).