short on the tail of the second part of our myopic biopic,  we immediately start on the third episode of this journey. Late 201o I receive an email from Eraldo Bernocchi saying “We must absolutely release the material of this kid that is active in dub-techno, he’s amazing”. “Who is he?” “He’s a German guy – uh, no, sorry, he’s Russian”. “Where’s he from?” “Kazan”. I immediately focus my mind and imagine a small village in the middle of the russian federation. Yep right, a small village…inhabited by 1.2 million people…Crickey how little I know of the world surrounding me. So this is roughly how we got in touch with Marat Shibaev a.k.a. Martin Schulte. 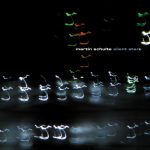 Martin Schulte’s work draws, as his pseudonym suggests, from the German tradition of Glitch and Clicks’n Cuts (Oval, Mark Ernestus, Moritz Von Oswald, Basic Channel, Thomas Fehlmann, a tradition going back to the early/mid 80’s that received its consecration by the end of last century), but enhances it with a very “Dub” Sensitivity. His release for RareNoiseRecords, Silent Stars unites elements of the fragmentation of C’nC but imbues them with the basso continuo of Dub … the effect is other-worldly, one feels like a spectator of an under-water concert. Music pervades, titillates and overwhelms the listeners’ auditory apparatus. Soothing, entrancing, Silent Stars is another work of great wonder by this young yet already very prolific musician of the world.

The inspired Artwork for this release was again due to the great Petulia Mattioli, whose collaboration with RareNoiseRecords produces ever more fascinating results – “Look, The Sky Is Full Of Glitch”.

2009 and 2010 also saw our production arm, RareNoiseProductions working hard. RareNoiseProductions is the moniker we use when we work on music projects that might be released on a different label or are works commissioned by some public entity or are to be sold as part of a music related (but not music-centric) product. 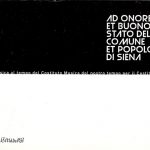 In 2009, the City of Siena celebrated the 700th anniversary of its City Constitution (the Constitutional Charta of the medieval city-state of Siena) literarily the “Costituto”. To celebrate this incredibly important event in the City’s history, the authorities decided to outsource production of a double CD (via 21st Recordings) – the production of part of this celebratory release was entrusted to Eraldo Bernocchi. The recording, roughly set up as a long suite of songs (based on arrangements of 13th century text) interspersed with moments of great musical delicacy, involved Eraldo Bernocchi (guitars), Lorenzo Esposito Fornasari (voice, electronics), Markus Stockhausen  (trumpet / electrified trumpet), Giovanni Lindo Ferretti (author of all the lyrics and main singing voice), Ezio Bonicelli and Raiz. In the caustic tradition of the underlying text, several passages are not without humour as “Porci e Troie” (sung by Lorenzo Esposito Fornasari and Giovanni Lindo Ferretti highlights) – we are in Tuscany after all …

Our second production (which we talked about in this previous post), was again a born of a moment of genius involving Eraldo Bernocchi, Petulia Mattioli and this time ebullient wine producer and theoriser Michele Satta. The driving idea behind these performances was to create a multi-sensory experience, first by having a musician/musicians of great renown play live in the cellars of the Satta vinery, then to transport this “moment/being there” into a high-end package containing a magnum of a very special wine (depending on the year) and a recording of the performance itself. The recording should be as untainted as possible to allow a recreation of that self-same moment. All transactions would be settled in bottles of wine and the recording would only be released as part of a very specific Lifestyle package. The first Semetipsum concert, held in 2009, was a live performance by Eraldo Bernocchi and Harold Budd; Wine (a magnum of Sangiovese 2008) and music were released in limited, numbered quantities late 2010