Nov 28th will also see the release of the long awaited “Winter Garden” by Eraldo Bernocchi, Harold Budd and Robin Guthrie on RareNoiseRecords 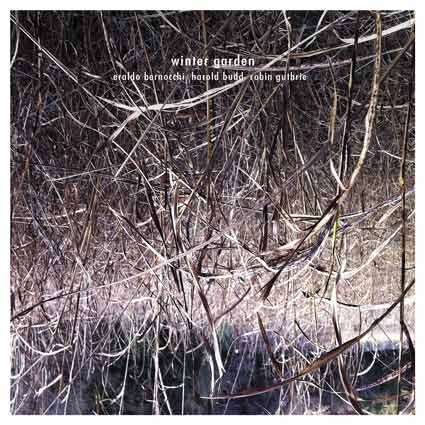 We  say “simultaneous”, for Eraldo Bernocchi had previously produced, arranged and played on “Fragments From The Inside” (released by SubRosa) with Harold Budd, while the collaboration between Harold Budd and Robin Guthrie started in the 80s (Lovely Thunder, The Moon and The Melodies, The White Arcades) and became a quasi-partnership since 2005 (see for example the soundtrack for the film Mysterious Skin by Araki, the dyptich “Before The Night Falls/After The Day Breaks” and more recently “Bordeaux”, all released on Darla Records).

Recorded in Tuscany in 2010, produced in Tuscany and in the south of France in 2011, Winter Garden aligns itself with the aforementioned recent releases by Budd and Guthrie, awash with Budd’s minimal piano and Guthrie’s guitar drones, only to differentiate itself through a more marked yet very elegant use of electronics by Eraldo Bernocchi and being punctuated by a soft, minimal bass pulse.

Listen to “Stay With Me” and focus on all music after 3:30

WINTER GARDEN will be available from November 28th from the RareNoiseStore (www.rarenoisestore.com) for worldwide shipping as CD DIGIPACK only

US distributor : Darla Records (please contact james@darla.com for stock enquiries in US).

To get Stock of WINTER GARDEN in Europe contact darren@cargorecords.co.uk.